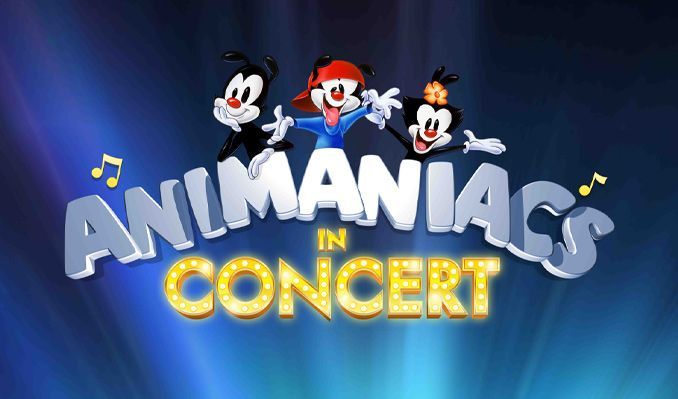 It’s time for Animaniacs in Concert. The most zany, animany and totally insany Animaniacs are back! Fans of the beloved Warner Bros. animated series, are in for a treat as they get up close and personal with original voice actor — Rob Paulsen  — and Emmy Award-winning composer Randy Rogel who created many of the memorable songs you STILL can’t remove from your brain pan. Together they bring the stage to life with comedy, animation, and an unforgettable playlist of Animaniacs hits.

In addition to the concert, the Rob and Randy will share fun anecdotes and silly secrets from the many years of the making of the series. The concert will feature more than 20 of the most popular songs from Animaniacs, including ‘Yakko’s World’ and ‘I’m Mad’ — and fans will want to hear an updated version of the globe-trotting, world-famous ‘Yakko’s World’ song, featuring newly christened countries as they have come to be.

With more than 2,000 half-hours of animation credits under his “Yakko” buckle, Rob Paulsen’s versatility shines in his starring roles as the voices of Yakko Warner, Pinky and Dr. Scratch ‘n’ Sniff. Randy Rogel is a three time Emmy Award-winner, who began as an original writer on Batman: The Animated Series, before joining the creative team of Animaniacs, writing most of the songs and many of the scripts.

If you’re a fan of music and animation, come join the zany-fun! Don’t miss  the chance to experience Animaniacs like never before in Animaniacs in Concert!

Animaniacs in Concert is coming to The Agora in Cleveland near you. For tour information, please visit www.animaniacslive.com.

Animaniacs in Concert is a delightful show filled with fun, laughter, animation, and wonderful songs performed live on stage by original cast members from the television series. Winner of multiple Emmys and the Peabody Award, ‘Steven Spielberg’s Animaniacs” plays to millions of fans worldwide and is now back in production at Warner Bros Animation. If you love comedy, animation, unforgettable characters, great songs, and fabulous performances, enjoy a fantastic evening of entertainment at Animaniacs in Concert!
Read More

Official WebsiteFacebook
*Service and handling fees are added to the price of each ticket.
Buy Tickets