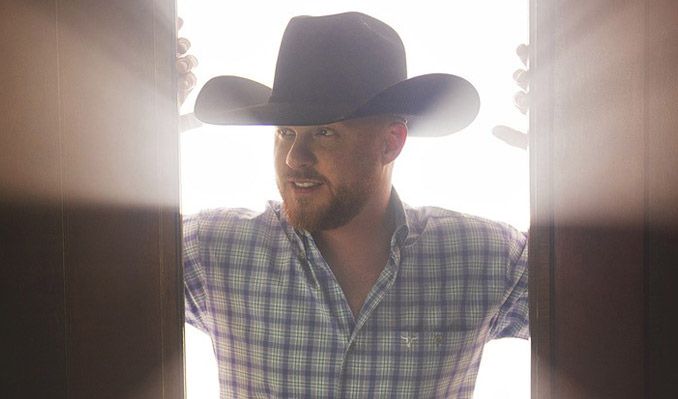 After landing two releases in the Top 10 of Billboard’s country albums chart on his own CoJo label and selling 74,000 tickets for a single show, to earn recognition as the only unsigned artist in history to sell out NRG Stadium at RodeoHouston, one of Texas’ most-sought-after talents finally agreed to sign with a major label. Warner Music Nashville won a Music Row sweepstakes and enticed Johnson – who’d turned down several majors before – to join the team and take a shot at turning a concert success story into one with multimedia, national hit-making cred.

Johnson’s passionate, rowdy concerts have already drawn comparisons to Garth Brooks, and the music from his previous albums – inspired by ‘90s country foundations, but built for the 21st century – has made him a familiar presence on Texas and Oklahoma red-dirt radio.

Johnson’s introductory Warner project, Ain’t Nothin’ to It, ups the ante. After writing the bulk of his previous material, he put out word in Nashville that he was open to songs from other sources, and the results were astonishing. A-list writers – including Chris Stapleton, Radney Foster and Brothers Osborne guitarist John Osborne – came to the table with songs that suited Johnson’s life and disposition. Music fans who are just now coming to the table will get a quick understanding of Johnson, from the rowdy troublemaker in the swampy “Doubt Me Now” to the devoted family man in the title track to the self-penned ex-bull rider in “Dear Rodeo” to the devoted Christian in “His Name Is Jesus.”

Johnson wears his musical influences on his sleeve – referencing George Strait in “When Cowboys Were King,” Alan Jackson and Tim McGraw in “Y’all People” and Johnny Cash, Jackson Browne and Bruce Springsteen in “Monday Morning Merle.” Two choice covers further meld his personality with his musical taste. “Husbands and Wives,” a song that recognizes the day-to-day difficulties of holding a marriage together, is Johnson’s way of tipping a hat to one of country’s ultimate songwriters, the late Roger Miller. And “Long Haired Country Boy” has The Cody Johnson Band playing up his rebel side with a song established by The Charlie Daniels Band (yes, that’s the CJB covering the CDB). But Johnson’s version is filtered through the grizzly tone of Lynyrd Skynyrd, Hank Williams Jr. and Brantley Gilbert.

“I don’t sing nothing if you can’t see my soul,” Johnson says. “If it’s ‘Long Haired Country Boy,’ when you see me, you know I can walk that walk, but when we’re playing a gospel song, I want you to know that I feel that, too. I do want you to feel the sadness in ‘Husbands and Wives.’ It’s a weird thing to want to show your soul to people and still want privacy in your life.”

Johnson’s ability to show that soul – to dig into the ache of the sad songs and set a room in virtual flames with angry barn-burners – is tied directly to his insistence on channeling his energies into pieces that reflect his real-life experiences. By getting to the heart of those songs, his own emotions end up transferring to the listeners’ inner worlds. It’s that kind of connection that made him a self-sufficient musician even before the major-label infrastructure came calling. And it’s that engaged fan base that kept him from being a pushover when the record executives did knock.

“We had already created a multi-million dollar organization, and that goes to the fans,” Johnson says. “Five hundred thousand or a million streams – I didn’t even know what a stream was when we started this thing. Seriously. But people have given me this opportunity. I couldn’t take for granted their opportunity by taking a deal that would have changed who I am, who they invested in. So it was easy to say no, ‘cause I’ve got the CoJo Nation to fall back on.”

That fan base took time to build, just like Johnson’s talents – and his story. Growing up in Sebastapol, Texas, he heard music from the honky tonks across the Trinity River. He learned drums and guitar and started writing songs while still in junior high. A teacher encouraged Johnson to form a band, and they finished first runner-up in a Texas State Future Farmers of America talent contest.

Much like one of his heroes, the late Chris LeDoux, Johnson hit the rodeo circuit and made his first album during that time, selling self-financed CDs from his pickup as he chased the elusive eight-second dream. But broken bones and the cost of competition took their toll, and he eventually ditched life as a rodeo pro who played music on his off days to become a prison guard in Huntsville who played clubs on the weekends. The crowds began to grow, and he pieced together a string of hits on the Texas music charts. Plus, he snagged the Texas Regional Radio Music Award as Male Vocalist of the Year. His wife, Brandi, shocked him when she agreed he should go after music as a fulltime job.

Backed by the Cody Johnson Band, he earned a reputation with the audience for leaving it all on stage. Inside the band, he developed a reputation for changing set lists on the fly to capture either his own mood or the vibe of the crowd. “Husbands And Wives,” for example, ended up on Ain’t Nothin’ to It after he channeled some short-term anxieties about a spat a home into an impromptu live version.

Along the way, Johnson found his identity, captured it in song, and refused to have it compromised by his vocation or the temptations that accompany it.

“You can be devoured by the music business,” he says. “At the honky-tonk level with cocaine and whiskey, you can fall into horrible things from the very beginning. You can fall into the ‘screw the label, screw the big man, we’re the underdog’ mindset. I’ve had to take a stance on who I am, and I’ve learned to admit when I’m wrong. I’ve grown up a lot, because the school of hard knocks and honky tonks will teach you a lot.”

In 2018, Johnson won Texas Regional Radio’s Male Vocalist again, while adding Album of the Year for Gotta Be Me and Single, for “Wild As You.” By then, he had already completed work on Ain’t Nothin’ to It with longtime producer Trent Willmon, a fellow singer/songwriter who authored hits for Montgomery Gentry and Steel Magnolia. Nothin’ purposely shows the full range of Johnson’s talents, from the acoustic tack of “Fenceposts” to the ultra-sexy “Nothin’ On You” to the rockin’ country blues of “Honky Tonk Mood.” Particularly revealing are his vocal performances on the thoughtful, album-launching title track and in “On My Way To You,” the classic-country ballad that emerged as the first single. Johnson delivers both with a conversational tone, but creates a dramatic arc through flourishes of raw power at just the right emotional moment. He delivered all of the album’s vocals in a scant two days, treating each song as if it were part of a concert. The intensity and the directness of those performances supports the no-nonsense attitude Johnson brings to the stage – and to his life.

“I don’t like B.S.,” he says. “Make your ‘yes’ mean ‘yes’ and your ‘no’ mean ‘no,’ and don’t have a gray area in between. Stand for what you’re going to stand for, don’t give your opinion on something you don’t have an opinion on, and if you do, make damn sure you get your point across.”

That feeling, that conviction, is what created a bidding war for the right to release Johnson’s album, and he ended up signing with Warner after trading shots of tequila with WMN president/CEO John Esposito, who came with a much more generous offer after trying to sign Johnson on two previous occasions.

“There’s that rodeo competitor in the back of my head that says, ‘I don’t want to ride a bull, I want to be a world champion bull rider,’” Johnson says. “All my heroes have taken this step, and I’ve been given the opportunity with Warner to take this step on my own terms with a huge monster behind the machine that I’ve created. It doesn’t get any better than that.”

Official WebsiteFacebookYouTubeTwitter
*Service and handling fees are added to the price of each ticket.
Cancelled