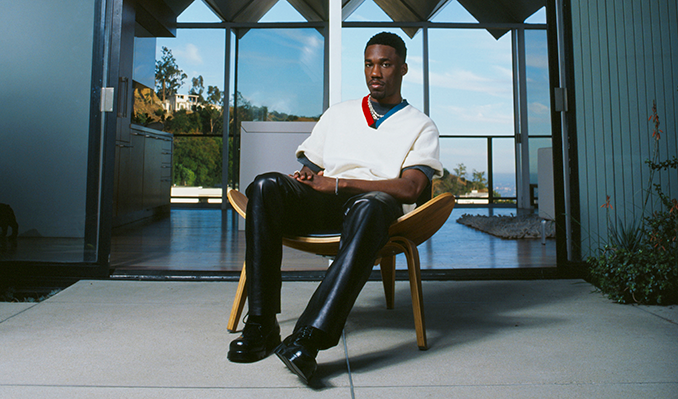 GIVĒON has always used his raw, evocative songwriting to mine a confusing world for answers, but, lately, he's been fixated on a problem he can't solve. Truth and deception, as he sees it, go hand-in-hand, but it's hard to untangle which is needed where effective communication and human vulnerability are involved. "It's one thing I can't quite figure out,” he says. “Sometimes the truth is rewarded, and then sometimes it’s frowned upon. Do we want truth, or do we want a little deception to feel better?” This sort of tension is at the heart of GIVĒON’s work—he isn’t afraid to probe uncomfortable areas, to ask hard questions. “Lie Again,” his new single on Epic Records, follows this approach, showing off his emotional curiosity and the deep warmth his songs emit.

Cinematic R&B arrangements match the track’s turmoil, swelling and roiling as GIVĒON meditates on betrayal. “This time it’s OK to lie to my face,” he croons. “Don’t want you to say it, just let me think it.” The mesmerizing ballad was born the day after he learned of a lover’s past infidelity. “It’s really just a testament to the phrase, ‘Ignorance is bliss,’” the 27-year-old explains. “Lie Again” is the second offering from his upcoming debut LP after September’s swoon-worthy heartbreak anthem “For Tonight,” which has gone Gold in the U.S. That song finds GIVĒON indulging in what feels right in the moment even it it’s not what’s right for him in the long run.

“I’m in my 20s,” he says. “There’s so much I have to learn. I don’t think I’ll ever make a song where I have a fixed long-term answer. It’ll always be something impulsive or spontaneous.”

But few of the decisions GIVĒON has made so far in his career feel hasty, though his ascent has been rapid. “I wait until I have something to say before I say anything,” he explains. Luckily, his success so far speaks for itself. GIVĒON is nominated for six Grammys at the 64th ceremony, including best R&B song for “Heartbreak Anniversary”—his first-ever Billboard Hot 100 smash, from his March 2020 debut EP Take Time—and four nods as a featured vocalist on Justin Bieber’s enduring hit “Peaches.” GIVĒON’s March 2021 compilation When It’s All Said and Done… Take Time became his first Top 10 album on the Billboard 200, debuting at No. 5. But for his part, In an industry overwhelmed by instant gratification and streaming numbers, artistic development remains a pillar for GIVĒON. He wants to tell stories, not just write songs.

That nuanced mindset traces back to a nurturing upbringing in Eastside, Long Beach, California. GIVĒON’s mother shielded him and his brothers from the area’s gang culture, and encouraged him to sing. “My mom is one of the only people who has 100 percent of me,” he says. Because she believed in his voice, he began expressing more and more of his authentic self to others.

His confidence drooped once puberty drastically dropped his register, though, until discovering baritone icons like Barry White and Frank Sinatra empowered him to embrace his gift. “I want to come off as a classic artist,” he says. “That’s the word I always go back to: classic.” He studied creative writing at a community college, and waited tables at Bubba Gump Shrimp Company in downtown Long Beach for five years. He thought he had hit upon his big break several times, especially when he had a chance meeting with SZA, but nothing came to fruition until he connected with acclaimed producer Sevn Thomas (Drake, Rihanna, Travis Scott) in 2019.

GIVĒON had only released two original songs in 2018 and 2019, but they were powerful enough to land him a spot opening for Snoh Alegra on tour. He penned “Chicago Freestyle” for his set, which made its way to Drake, who placed it on his early 2020 mixtape Dark Lane Demo Tapes. Fans got a taste of GIVĒON’s one-of-one voice and have since been insatiable.

Last fall, he got to truly connect with listeners for the first time on his first-ever headlining tour. Soon, he will deepen their bond on the Coachella stage and across Europe. He could easily justify dropping a string of singles to satisfy his mounting admirers, rack up streams, and capitalize on mainstream momentum. But that wouldn’t be true to himself—coasting by would be a betrayal of his potential. “All those people who are currently fans, I’ve got to re-win them over,” he says. “You have to make sure it’s worth the wait.” If GIVĒON’s next project is full of songs as emotional and real as “Lie Again,” there’s no doubt it will be more than worth it.

Fan ClubFacebook
*Service and handling fees are added to the price of each ticket.
Buy Tickets